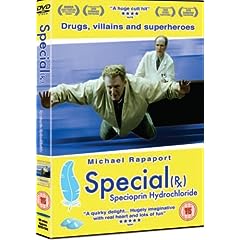 Have you ever thought you had super powers and can save the world?
Special is a hilariously serious film starring Michael Rapaport. He’s not your ordinary superhero.

The film is about a parking warden (meter maid in America) that trials a new drug called, Special (Specioprin Hydrochloride) that removes self-doubt. He soon realises he has special powers, including levitation, telepathy, teleportation, and the ability to walk through walls. Overnight he becomes somebody who now has a purpose to live. Although he realises being a superhero isn’t as easy or fun as he thought.

The downside is that he is really having adverse side effects and what he believes is only true only to him; not to anyone else. It is a study of mental illness and how the individual’s map of the world IS their reality. He only has one friend who is prepared to believe him, everyone else wants him to stop taking the magic pills. Is he willing to go back to the way things were before having super powers or risk losing his mind and his life?

It goes from comedy to quite a dark drama. The way the characters interact is brilliantly scripted, each staying true to themselves in a mixed up world. Sometimes it is tough deciding who’s reality you want to believe as you watch the story unfold.

Imagine having to live in a world where you have to believe everything other people tell you – now that really does sounds crazy, doesn’t it!?

Special didn’t get a mainstream release and isn’t your usual Hollywood A-list blockbuster, so you may not even watch it. Should you take the opportunity to watch a copy, it is a film that will make you think – and that is what cinema and life should be about. Giving you something new and challenging to let you make a decision about, than be spoon fed the morals of a formulaic movie.

Check it out! Special is currently on re-release in the US cinemas again and available on DVD worldwide. Buy the DVD here from Amazon

“LES FRANKEN (Michael Rapaport) leads a painfully unremarkable life as a metermaid until he enrolls in a drug study for an experimental anti-depressant. An unexpected side effect of the drug convinces Les he is developing special powers and must quit his job to answer his new calling in life… Superhero.

A very select group of people in life are truly gifted. Special is a movie about everyone else.”

4 thoughts on “Are you Special?”