Dear Wife/Sweetheart/Girlfriend/Partner/Whoever it may concern,

1. Between 11th June and 11th of July 2010, you should read the sports section of the newspaper so that your aware of what is going on regarding the world of football and you will be able to join in conversations.
If you fail to do this then you may be ignored. DO NOT complain that your not receiving any attention.

2. During the World Cup, the TV is mine, at all times.

3. You can pass by the TV as long as your crawling on the floor and don’t distract me.

4. During the games I will be blind, deaf and mute unless I need a refill on my drink or need something to eat. So I wont be answering the phone or the door or look after the baby.

5. It would be a very good idea to have at least 2 six-packs in the fridge at all times and have plenty of food in. You may be allowed to use the TV during 12am and 6am unless their is a replay of a really good game.

6. Please! If you see me upset as one of my teams are losing DON’T say “get over it, it’s only a game” or “don’t worry they will win next time”. You will only make me love you less.

7. You may watch one game with me. But you can only talk during the half time commercials.

8. The replays of goals are very important if I have seen them or not, I will want to see them again many times!

9. Please tell your friends not to have any babies or any other child related parties or any gatherings that require my attendance as I will NOT BE GOING!

10. But if a friend of mine invites us to their house to watch a game then we will be there in a flash.

11. The highlights programme is just as important as the games themselves.

12. And finally, please save expressions such as “Thank god the World Cup is only on every 4 years”. Because after this I have the Premier League, Champions League, SPL, Serie A, La Liga, Bundesliga, FA Cup etc to look forward to.

P.S. if you get stuck on the road phone the Police or the AA.

Thank you for your co-operation.

The offside rule explained for girls:

You’re in a shoe shop, second in the queue for the till. Behind the shop assistant on the till is a pair of shoes which you have seen and which you must have.

The female shopper in front of you has seen them also and is eyeing them with desire. Both of you have forgotten your purses.

It would be rude to push in front of the first woman if you had no money to pay for the shoes.

The shop assistant remains at the till waiting.

Your friend is trying on another pair of shoes at the back of the shop and sees your dilemma.

She prepares to throw her purse to you.

If she does so, you can catch the purse, then walk round the other shopper and buy the shoes!

BUT, you must always remember that until the purse has “actually been thrown”, it would be plain wrong for you to be in front of the other shopper and you would be OFFSIDE! 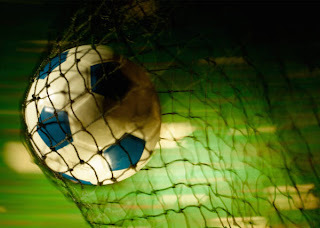 Can a game of football determine the future?

David Beckham has an injury and is potentially out of the World Cup but his career is far from over as some may speculate. He may not be playing but I’ll definitely be watching World Cup 2010 and having my regular games (real football fans know what a football feels like to kick too)

I played my usual game of football tonight and wasn’t sure if I wanted to go after last week’s events with the bank – but it’s the only exercise I get. Also I wanted to vent and expend some energy that had been pent up, so I said yes. After all it’s only a meaningless kick around with friends.

On the way there I’d decided this game would decide how much passion I still had left to be in business and life. As soon as I had that thought, I wished I could take it back. Once you think or say something (even to yourself) you can’t take it back, as the universe hears. I was in trouble now.

What if I got hurt? What if I lost? What would it mean if it was a bad game for my team? I could just flip a coin and if I didn’t like the result, we could do best of 3 or best of 5 or (Ad infinitum)…
I told myself I’d have fun regardless and see how it went. Pretend it’s just a game.

When I arrived I was put on the side with 3 top strikers. Normally this wouldn’t be a problem but they’re the kind of guys you have to tackle to get the ball from if you want it, even if they’re on your side!  I may as play against them if I have to fight for the ball so I asked to go on the opposing side but it was a firm no… time to play.

One of our main strikers got injured and substituted.  I got laughed at for not having my regular football shirt but a crew shirt instead.  “Millionaire Mind crew?” he said, “More like cabin crew!” Oh, the usual witty banter we have, I was getting some thrown back at me today.  Later one of their best players ran around me in circles and I twisted my ankle and fell.  Surely this was going to determine the rest of my game now. I felt silly at the injury and hobbled on knowing it would get better, as I often do. After all, someone has to play the part-time super hero.

I’d show them, talk is cheap. Then I got a goal in… and then another. Then a clearance from the half way line ended up in the back of the net! My team were as surprised as I was, since I’d not had this good a game for a while – I usually play defender as I have a powerful kick (toe poke it like Bobby) or mid-fielder and set up the other players as I believe there shooting is much more accurate.

Then something strange happened. My team started passing to me more frequently and as often as I set other players up for a shot, they did the same. These guys were looking for someone to play with that was in the zone and on top of their game.  I stopped counting after scoring my second hat trick. As the final whistle blew one of the guys on the other team said “You’re going to go home happy tonight.” And it was true. Winning feels so much better than getting beaten, especially when the other team are also happy for your achievement. 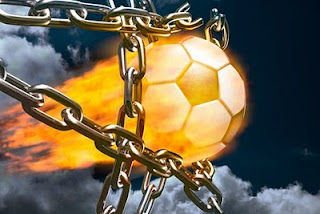 Can a game of football determine the future and decide who goes home happy after that game? Most likely… if only wars were fought on the football pitch with a ball too.

Was it game over for me in business? Not at all, I was on fire and ready to carry on playing… Do your worst because whatever team you put me on, we will come together and aim to score every time AND win!