I was driving up the dual carriageway behind a very slow funeral procession as the hearse and family followed to the cemetery. I graciously slowed down and let them proceed without the temptation to undertake like the Kirklee Council vehicle drivers did.

As I got further up, I saw a police officer parked by a speed camera as he was probably maintaining it or changing the film. At the annoyance of getting flashed in the past, I beeped at him three times but did not salute him.

It was then that my sister pointed out the parade of cars in front all slowly moving out of the way… oops… I’d forgotten I was following them.  She asked me if I felt bad about it but why should I? I didn’t blow the horn at them but it was nice of them to be considerate and let me pass.

Carlsberg don’t do definitions – but if they did, this would be the Definition of ‘every cloud has a silver lining’.

I may have behaved like a donkey but the Law is a real ASS! 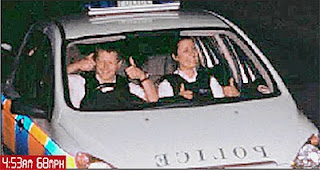 Driving ban for ‘look, no hands’ policeman who raced past speed camera at 73mph with thumbs up 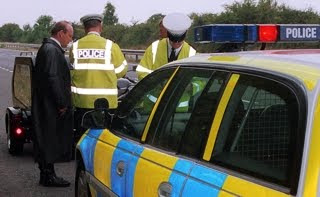 “What’s the problem? There’s two of us in the car, isn’t there?”