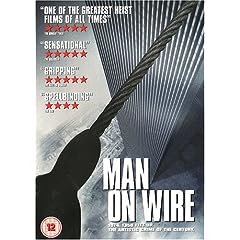 Have you ever dreamed about something so big and impossible that you scared yourself?

Philippe dreams about walking a wire, not just anywhere but between 2 of the highest buildings at the time, The World Trade Center. A dream that started with the seed of an idea in a dentist’s waiting room, years in the making and planning, till that fateful day to realise it.

“On August 7th 1974, a young Frenchman called Philippe Petit stepped out on a wire suspended between New York’s twin towers, then the world’s tallest buildings. After dancing on the wire, with no safety net or harness, he was arrested.”

It’s a movie about a man’s dream, aspirations, drive and courage, with a very thin line between life and death. Where the fear would make most of us run a mile, if not across the entire country – this passion drove one man forward to always do what he wanted.

His team were along for the ride and to support him in achieving it. It must have been an exciting adventure that you can only imagine being part of. “The plan was illegal but not wicked or mean” was the justification they all used to allow it to become reality. It just makes you wonder how one man could do this without regard for the consequences – but to him, failure was not even an option, how could it be!

“the tasks they faced seemed virtually insurmountable: they would have to find a way to bypass the WTC’s security; to smuggle the wire and rigging equipment into the towers; to suspend the wire between the two towers; to secure the wire at the correct tension to withstand the winds and the swaying of the buildings; to rig it secretly by night – all without being caught. Not to mention the walk itself…”

This documentary shows the amazing build up from wire walking at Paris’s Notre Dame Cathedral, then Sydney’s Harbour Bridge to the WTC. The friends and team involved and the human dynamics and emotion behind such a stunt. It leaves you wondering if it really was real. I couldn’t pull myself away until the end… This film was more awe-inspiring than putting man on the moon. This was a man putting himself in space with just the power of his spirit.

The atmosphere and story-telling is as if you were there. You can feel the passion of the people involved, even thirty years later. It must have been amazing to have been a part of something so unbelievable and impossible that someone, somewhere thought it would be a walk in the park.

Do you have a dream that you’ve not plucked the courage together for yet? Watch this film to see what is possible with the human spirit when you chose to follow your dreams. Start building the foundations to your goals or join someone else’s dream because it’s better to try something and fail, than not to try and regret it for the rest of your life. Reach deep inside because if one person can do it, so can you. And remember it’s teamwork that makes the Dream work!

Unless of course it involves great heights and gravity, then leave it to the professionals OR why not become one. I hear the view is beautiful… and the sky really is the limit. If you want something, nothing is impossible!

Man on Wire is a truly beautiful film and literally breathtaking to watch. An indie film from a British director that doesn’t need a Hollywood studio to embellish it, as the truth speaks for itself and creates a unique must see real-life thriller! The best documentary I’ve seen in ages.

Rent it or get it on DVD from Amazon: Man on Wire