I was playing football and shouted for a handball. Everyone stopped and after debating for a minute or two they decided it wasn’t a foul. That was when one of my team players turned round and said “Shut up Bobby!”
Well I wasn’t expecting that but decided to take it literally, after all he was a ‘better’ player than me (his opinion, not mine).

As the game went on I was unable to shout for the ball when I was in a good position so we missed opportunities. There was another obvious handball but I couldn’t call it, waiting for someone else to – but everyone played on. When my team mate was being chased down by the opposition, I didn’t shout ‘man on’ so he was taken unaware and tackled. Clearly none of this was beneficial for anyone.

I couldn’t figure out why it always appears that our communication issues are always someone else’s fault!?
So even though the communication was clear for me to not say anything, by me not communicating meant it made the game worse for my team too. A lot of the camaraderie and fun of playing football also disappeared.  Think I’ll say what I feel is right next time and let the ‘better’ players let their football skills do the talking instead.

How do you communicate with people? Words can be very powerful – even by merely using them or not. Clarity is also important to make sure your message is received. You can use positive words to inspire your team as easily as using negative words to discourage them.

The words that come out of your mouth really do create your reality. What words do you hear every day in your environment and from the people around you? More importantly, how clearly do you communicate and the mind the language that you use?

Sometimes it’s better to say nothing at all. Did you know that Buckminster Fuller took a “year of silence” during which he pondered his purpose in life?

Happy thoughts lead to happy words and vice versa. Putting a smile on someone face is just as easy as not doing. What choice will you consciously make next time you open your mouth? 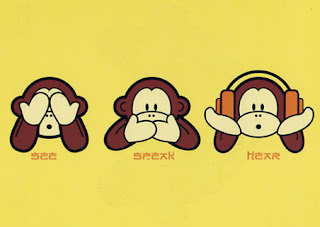