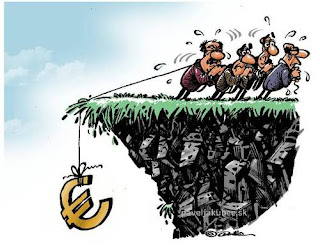 Not a very festive blog but read on if you want to know what the heck is happening in Europe and who’s next… Who let the PIGS Out?

The Global economy is a mess right now, Governments want it one way, Banks another and the People… well you just watch the News right now – they have the final say! There’s a lot of strange energy around right now, I’m sure you’ve noticed it even if you don’t know what I mean – it appears negative but it’s change for the best.

American and World Government and their Leaders have no need to manufacture Bad News anymore… it’s really here! We won’t discuss The illegal Wars, WikiLeaks Julian Assange or anything else – lets keep it European today!

Never mind ‘Who Let the Dogs Out’, you should be asking ‘Who Bailed the PIGS Out?’
They used to talk about investing in the BRIC countries (Brazil, Russia, India & China) now it’s all about the Bankrupt PIGS (Portugal, Italy, Greece and Spain) aka PIIGGS (to include Ireland and Great Britain). Luckily the EU are making plans to bail them all out… Who has the printing press for all these Dollars and Euros being flooded onto the market? Unfortunately the money is only making it as far as the Fat Cats in Governments and Banks!

Banks, Governments and Corporations do NOT have a conscience or spirit – they require human beings to animate them.  When you ask their employees to tell the truth, be honest and do the RIGHT thing – they will not speak up and represent themselves but go to a Lawyer (pronounced liar) to re-represent them (all paid for by the corporation with your money). As when given the option to be honest, they choose not to!
After all who would bite the hand that feeds them? Even if it was slapping the rest of their family and telling them to as well, before it put leftovers in their mouth – having had the main meal itself!?

You can’t bury or hide the truth, as it always comes out.

The Real Pigs are in Government and Banking!

[My comments are in italic square brackets in the quotes below]

“EU leaders have agreed to set up a permanent mechanism to bail out any member state whose debt problems threaten the 16-nation eurozone.

This year Greece and the Irish Republic have received emergency EU bail-outs.

The 27 leaders, meeting in Brussels on Thursday, agreed that in 2013 the permanent mechanism would succeed the eurozone’s 750bn-euro (£637bn; $1tn) temporary bail-out fund [how temporary and where does it come from? ONLY $1 TRILLION!], the European Financial Stability Facility (EFSF).

The summit comes amid continuing concern about stability in the eurozone, as national debts and deficits have soared above the EU’s targets.

Portugal and Spain have been under financial market scrutiny since the Irish Republic was forced to take an aid package of 85bn euros (£72bn; $113bn) last month. [Do you need to be forced to something if it was in your best interests? Short answer – NO!]

The European Central Bank (ECB) has been buying billions of euros of sovereign debt to ease the pressure on the countries seen as most vulnerable in the eurozone. It is to double the reserves it holds – to 10.8bn euros, from 5.8bn euros at present. [Yes, the ECB will own you too if your country accepts any money – oh, actually don’t worry, you should be more concerned about your country milking you before the ECB!]

They used to write about ‘Blood on the Streets’ in the Great Depression – well it’s back!

This means they risk seeing their monthly repayments jump if there is any change in the Bank’s base rate – which is currently held at 0.5%.

Combined with next month’s VAT increase from 17.5% to 20%, deep cuts to public spending, rising unemployment, and the soaring cost of everyday goods, household finances are facing an unprecedented squeeze. [You thought it was bad already, prepare to be bent over a barrel!]

‘A relatively small increase in interest rates could have a fairly sizeable impact on the housing market at a time when the market is already pretty weak,’ said Jonathan Loynes, chief economist at Capital Economics.

The forecaster said house prices were 20% overvalued and could fall by that amount in the next two to three years.

Among the worst hit by a rate hike would be those who stretched themselves to get on the housing ladder in the past two years.

The average tracker mortgage charges interest of 3.51% while a typical two-year fix has a rate of 3.54%.

Although this is seven times the Bank’s base rate, banks do not borrow the money they lend on to customers quite this cheaply. Typically they pay between 0.75% and 1.5%.”
[That’s right, nearly 500% mark-up (on your Govt. loaned money) – but only for those of you that can afford the large 25%+ deposits required to get on the housing ladder]