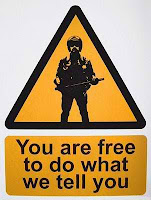 Will you do what you believe to be right or conform?
Question authority or do as you are told?
Think or obey?

Below is an article I found on mental health and psychiatry. Never mind the Terrorist Act, the powers that be can also use the excuse of Mental Health to invade your privacy, life and make you do what they say. Control through government sanctioned force rather than reasoning is the order of the day!

Asking for your rights could cause you to be diagnosed as having Oppositional Defiant Disorder (another made up ‘disease’) – remember you are free to do what we tell you and don’t dare question it.  Do you suffer from O.D.D. and being unique? Maybe it’s time to fall back in line if you’re not strong enough to have an opinion.

Remember: THINK, it’s not illegal yet! Or is it…

“Though portrayed as a harmless, natural consequence of the progression of science, medicine and law, there is substantial risk that accompanies this shift in thinking. When the pseudo-science of psychiatry becomes an arm of the state, it enables abusers of state power to stigmatize and control people.

To illustrate how psychiatry is closer to social science than medical science, journalist Charley Reese used to contrast it with the actual science of neurology that studies the physical structures of the brain. He would point out how psychiatry claims to study the intangible products of the physical brain such as thought, behavior and imagination. Of these three areas, only behavior can actually be observed.

According to Dr. Thomas S. Szasz, psychiatry has consistently served as an arm of the law since its development nearly 300 years ago. Dr. Szasz claims that psychiatry provides the state with a means of dealing with those deemed inconvenient when he writes, “If we recognize that ‘mental illness’ is a metaphor for disapproved thoughts, feelings, and behaviors, we are compelled to recognize as well that the primary function of psychiatry is to control thought, mood, and behavior.”

But what the state considers a nuisance isn’t strictly limited to those with true mental defects. It also applies to individuals who, for a variety of reasons, refuse to submit unconditionally to the state’s authority or demands. 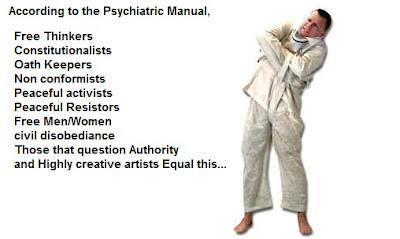 Free thinkers, constitutionalists, Oath Keepers, nonconformists, peaceful activists or resisters, and those who question authority, or practice any degree of civil disobedience, now have their very own disorder listed in the Diagnostic and Statistical Manual of Mental Disorders or DSM-IV-TR Fourth Edition.

Modern psychiatry calls this illness Oppositional Defiant Disorder. Among the gems found within this 3-page excerpt from the DSM-IV-TR Fourth Edition describing ODD and its diagnostic features: “The essential feature of Oppositional Defiant Disorder is a recurrent pattern of negativistic, defiant, disobedient, and hostile behavior toward authority figures that persists for at least 6 months.”

Those who question the wisdom of being electronically strip-searched or physically groped in order to board a commercial airline flight may now be singled out for “special attention.” Those who refuse an order to confiscate lawfully owned firearms from private citizens who have committed no crime are prime candidates for deep scrutiny of their mental health. Engaging in any form of civil disobedience, freethinking or non-conformity is an invitation to be treated as a direct threat to the authority of those in power.”  – source: http://psychiatricnews.wordpress.com 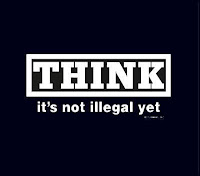 Authority will have you think, what they want you to think – and that everything is OK.
You can trust your Government, Banks, Police and Courts as they are there for you – not themselves.
What a rude awakening everyone is in for (especially those of you who are already nodding and about to fall into a deeper sleep). WAKE UP!

So what happened? The Credit/Debt Bubble and Bust – that’s what!
The Banks were lending money that didn’t exist and now are printing even more to make matters worse.
The Government are doing there best to keep the economy going but it has to stop at some point and deflate the bubble.
Where does all this money go? Ask your Bank manager and local MP – as someone up the social and economical pecking order is getting it by the truck load.

Did you know that even McDonalds got a bail-out loan?
‘Too big to fail’ is what they call it whilst the average person is ‘small enough to screw.’

Anyone that invested in property is going to be hit hardest, that includes home-owners.
Whilst property was booming everyone took their eye off the ball and started speculating.
They forgot about the fundamentals, which are to run a business and cash flow (or pay off their home’s mortgage).
When the hard times came, many investors have been wiped out and others are having problems dealing with the aftermath of a Boom then Bust (myself included).
This isn’t just investors either but included the average family that has any debt, falling house prices and the real risk of unemployment (so just about everyone then!)

The true colours of people and businesses will show in these challenging times, so be prepared!
Businesses will go bust owing you money, Banks will play dirty and Lawyers will make loads of money with legalese (making the simple complicated).  Litigation appears to be on the rise whilst the conveyancing goes down – and bankruptcies up as loan approvals are reserved for the ‘too big to fail’.
(Note: Those cash-flowing are unlikely to borrow from the Banks)

You have a choice… sink or swim. ‘They’ want you to believe the recession is over – but the reality is it’s only just begun.  The media is there to keep you dumb and consuming.
Some seminars will only share the upside of property investing but shouldn’t you have some info about the downside to get a full picture as well?

It’s time to go Back to Basics, Beware of the pitfalls and plan carefully for your future.

If you want to swim you need to start thinking differently NOW!

(Register your email in the box at the top of this page to get further updates)
You can also follow me on http://twitter.com/bobbygill
and http://www.facebook.com/TheBobbyGill