Coming to a home near you soon? Or actually ask your friends and family because the white-collar criminals are likely already operating in your street lurking in the shadows!

If you’ve got such stories about UK Banks, then write in and let us know – the last thing they want is people discussing their crimes in public even though they’re spending the public’s money and harassing those very same people!

“Robo-signed documents, false affidavits and failure to notify defendants are just a few of the ways banks and their lawyers are accused of mishandling foreclosures.”
When these things are happening there would naturally be investigations into these crimes and corporate frauds – but the Police and justice departments are not interested in pursuing them.
Why would that be when the crimes are so public?
Why do criminal Bankers have no limits on what they will do and then seem to be exempt from investigation?  Maybe it is because they think they are ‘above the law’ and have ‘unlimited’ government funding that they do what they want.
So what is white collar crime?

“Within the field of criminology, white-collar crime has been defined by Edwin Sutherland as “a crime committed by a person of respectability and high social status in the course of his occupation” (1939). Sutherland was a proponent of Symbolic Interactionism, and believed that criminal behavior was learned from interpersonal interaction with others. White-collar crime, therefore, overlaps with corporate crime because the opportunity for fraud, bribery, insider trading, embezzlement, computer crime, copyright infringement, money laundering, identity theft, and forgery are more available to white-collar employees.”

It looks like Bankers are in the perfect place to be taking ‘money’ home with them.
They even have systems in place and what looks like ‘agreements’ with lawyers, courts and judges to allow their paperwork pass through the system whilst the little guy gets stomped on!

—
Here’s just some of the things they are up to:-

Wall St Banks have been caught stealing homes through fraudulent foreclosures.
They are moving people out of their homes before foreclosure completes, even emptying homes of possessions.
Telling people they have to be in arrears before they will help under new anti-foreclosure laws, then foreclosing because they are in arrears.
When people call for help the people are given fake phone numbers to get help.

Using illegal document to get foreclosures.

Faking foreclosure documents.
Foreclosing on homes that have been paid off.
Even setting up boiler room courts to rush them through.

Get more info and read about the crimes at:

—
In this story Bank of America ‘steals ashes of dead husband and ransacks house’ after foreclosure.

“A bank has been accused of unlawfully seizing the ashes of a dead husband from his grieving widow’s home.  Bailiffs working for the Bank of America are said to have broken into the Mimi Ash’s house during a foreclosure before ransacking the place.  And, according to a U.S. lawsuit, they helped themselves to family and childhood photographs along with her son’s ski medals while cleaning out the entire house.

Ira Rheingold, executive director of the National Association of Consumer Advocates, said that bank errors were happening all the time.  She said: ‘Every day, smaller wrongs happen to people trying to save their homes: being charged the wrong amount of money, being wrongly denied a loan modification, being asked to hand over documents four or five times.“

Yes, this what is really happening. It’s not a perfect world out there and it is time for people to support each other, share the truth and fight back against the white collar crime that is increasing around you all the time.

Watch this video below to see the deals that American banks are getting and would you be surprised if the same was happening in the UK and worldwide?
It may be a year old but it’s still relevant today. Stay informed and share the information.  Homes are for living in, humans for being treated respectfully and Bankers, well I’ll let you figure out what they are good for…
See how they play the numbers game to show that profits are more important than people!

—
Those Indymac boys were given deal by the FDIC, and borrowers were strong-armed

Transcript: “Does the Government REALLY want to fix this financial mess we’re in?

Like many banks during the world financial meltdown in 2008, IndyMac closed it doors. Months later, its assets were seized by the FDIC and sold to OneWest Bank by the US Government.

Well, guess who owns OneWest Bank: That would be Goldman Sachs; with bigtime VP Stephen Munchen and bigtime investors, George Soros and John Paulson – of no blood relation to ex-CEO of Goldman Sachs, Hank Paulson – who would be the ex-Secretary of the Treasury.

But just in case the OneWest guys would feel cozy and warm, the FDIC stepped in and decided to cover 80% to 90% of the losses, due to short sale or foreclosures that they might incur from those naughty IndyMac-mortgaged homeowners…

The reason why we think you should know about this case is because the Loss Calculations are based on the ORIGINAL home mortgage and NOT the 70% of the ORIGINAL value at which it was purchased by OneWest.

This is an actual sample case fro one of our TBWS viewers…now, this is going to get your blood boiling!

Then, that underwater homeowner got an all-cash short sale offer for his home that netted $241,000 to OneWest Bank.

Guys! They can’t lose money on this deal! OneWest Bank just profited on this short sale to the tune of $101,760 — all because of the sweetheart deal they made with the FDIC.

So, if you ever ask yourself, “Why is it so hard to get a mortgage loan?” The answer is that *there’s too much money to be made on short sales and foreclosures.*

Ready for an encore? The house still was sold for less than the original loan amount and the *borrower was forced to sign a promissory note for $75,000* to OneWest Bank!

So who really wins in the end? Well, just let you decide…

By the way, the FDIC just announced that they would start needing to borrow money from the Treasury — the Treasury being the place where all those Goldman Sachs guys used to call home before they called OneWest Bank home.

If you’re as mad about this as we are, share this with as many people as you can, so we can all understand more about this business that we care so deeply about…”

If you thought houses and rents were expensive in the UK, take a look at this 2-bed house built in an alleyway that just sold for $2.1 million (£1.3 million)

Listed in August 2009 for $2.7m, the Real estate broker said that “despite the awkward dimensions, the property will fetch its listed price due to its uniqueness, history and location in one of the city’s most famous preserved neighborhoods.”

Then again, with a rental of $10,000 per month, the new owner is not exactly looking for cashflow either! So that’s at least one person with cash who is confident that the real estate / property prices will go up giving them capital growth. 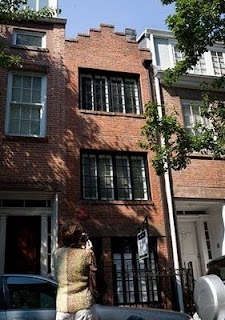 “A home less than ten feet wide, which has been dubbed New York City’s skinniest house, has sold for $2.1 million (£1.3million).

Number 75½ Bedford Street: one of New York’s narrowest, and most photographed, houses

The red, 9.5 foot wide, 42 foot long brick building in Manhattan’s fashionable Greenwich Village neighbourhood was built in 1873. Located at number 75½ Bedford Street, it was built on land which previously had been an alleyway between numbers 75 and 77.

The interior, unsurprisingly as the house isn’t a TARDIS, is even smaller, measuring just 8.5 feet wide.

The two bedroom, two bathroom home, which went on the market priced at $2.7 million in August last year, was last sold in 2000 for $1.6 million.

At the time it was listed last August, real estate agent Alex Nicholas admitted: ‘Due to the narrowness of the house, I think you have to be very clever in how you decorate.’

The narrow home has had some famous residents in the past – a plaque on it notes that poet Edna St. Vincent Millay once lived there; so did anthropologist Margaret Mead.

However, it looks like the new owners might not be living there themselves – the newly-sold building was listed on real estate websites on Wednesday as a rental available for $10,000 a month.” – Source: Tom Phillips – www.metro.co.uk