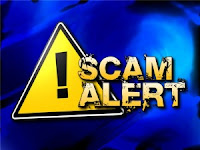 Corporates make it easy for scammers by making these types of calls as well.  Ever had a call from someone claiming to be from your Bank asking you to verify your details then getting arse-y when you refuse?

Even those with legitimate reasons to calls have poor phone manners and protocol.

Companies like HMRC use witheld and blocked numbers and Banks like HBOS hire third parties to contact you, that aren’t transparent either.
Let them get arse-y, upset, offended, annoyed – as they have called you randomly and asked for private information to usually get money for themselves.  They may or may not be legitimate but don’t take the risk.
With Governments, Councils, HMRC, Corporates ‘losing’, ‘selling’ and ‘sharing’ your personal details on a regular basis it is pretty easy for a scammer to get hold of them too.

For example: The AA called me and asked me to renew cover.

TIP: I asked for the cheapest rate (usually reserved for NEW customers by most companies) and it was 30% less. So remember to cancel any automatic renewals and re-negotiate ALL your contracts, insurance policies etc annually.

Then she asked me to confirm and provide my credit card details,  I refused.
She said she could prove that she was from the AA by providing breakdown details etc.
I explained that companies sell information and ‘lose’ it all the time.
She did not give her return call number saying I would not get back through to her.  I ended the call. Another third party commission call centre?

You may have received similar calls from mobile phone companies claiming to be your main provider, having ‘acquired’ your telephone number, network details and personal info from someone working at Orange/Vodaphone/O2/Carphone Warehouse etc.

For example: Someone called claiming they were from Orange and my handset was due an upgrade. Although quite convincing, his story was only about 99% accurate.  When I did call Orange, they said it wasn’t them.

For example: People contacted me from Bank of Scotland saying they worked for HBOS. When contacting HBOS, the Bank denied they worked for them, even though they had provided my personal information.
Note that Banks sometimes actively hire third parties to work for them but do not acknowledge it!

Scammers are con artists who work on convincing you that they are truthful and honest, hence taking advantage of your trust and good human nature.

The BEST policy is do NOT trust anyone claiming to be from a Company – unless you are expecting a call from them and then contact them back yourself!

– I now make it good practice to not answer blocked, unknown or with-held numbers.
– If on answering, it’s an automated message that is played, immediately hang up.
– Don’t call back if you do not know what the call is about.
– Take the name of the person, usually they refuse to give their last name and contact number anyway.
– Then google the number to find out if it is linked to their official site.

For example: I got a call from Barclays Fraud Department from an unknown number, with a automated voicemail leaving a return number to call.  I could not find reference to this number anywhere!
Even worse it was a legitimate call (from an unknown number) about an important matter, which I found out from the Bank later.  They set themselves up to fail and appear untrustworthy.

This is why you should not trust anyone that calls you and asks to verify your personal details – if they have any sense (which corporates are lacking) they would not ask for it, instead asking you to call them back on a legitimate number that you can find on their correspondence or official websites.

It’s also good to have recording device on hand, as you may have found through experience that Government, Council and Corporate employees have a tendency to ‘lie’ or not tell the whole truth when asked simple questions that deviate from their standard script.

If it’s important, they will write to you.

Also note on letters, when dealing with big companies, always write to the Registered office address via recorded delivery to the person named on the letter. They sometimes try to hide behind PO Boxes but must publish the recorded office details.

Below is an example about a BT phone scam going on at the moment.

Phone scammers often pose as staff of companies, government departments or financial institutions as a means of fooling people into handing over their personal details. While this particular instance of the scam targets UK residents, criminals may use similar tactics to steal information from phone consumers in other parts of the world.

While telecommunications companies may well call their customers to query an unpaid account, they are unlikely to attempt to prove the legitimacy of the call by disconnecting the line. If you do receive a suspect call, do not provide the caller with any personal or financial details. If you are unsure about a call, the safest course of action is to:
– Ask for the caller’s name and department details and then terminate the call.
– Find a legitimate contact number for the company either in a bill or other official documentation or a telephone directory. (Don’t use a contact number provided by the caller).
– Call the company and ask to speak to the original caller by name.

This strategy should effectively derail any scam attempts and also allow you to deal with the issue in the event that the call was actually legitimate.

Outline
Message warns that scammers posing as UK telecommunications company BT staff are tricking people into revealing their bank or credit card details by claiming that their phone service will be disconnected if they do not pay an overdue bill immediately.

Brief Analysis
The information in the warning message is factual. Such scams have been occurring in the UK for several years and a number of UK residents have already lost money to the fraudsters.

PLEASE PASS ON TO YOUR FRIENDS & FAMILY.

The new telephone ‘scam’ has arrived.

I received a call from a ‘representative’ of BT, informing me that he was disconnecting me because of an unpaid bill. He demanded payment immediately of £31.00, or it would be £118.00 to re-connect at a later date.

The guy wasn’t even fazed when I told him I was with Virgin Media, allegedly VM have to pay BT a percentage for line rental!

Obviously the fella realized I wasn’t believing his story, so offered to demonstrate that he was from BT. I asked how & he told me to hang up & try phoning someone – he would disconnect my phone to prevent this.

AND HE DID!!
My phone was dead – no engaged tone, nothing – until he phoned me again.

Very pleased with himself, he asked if that was enough proof that he was with BT. I asked how the payment was to be made & he said credit card, there & then.

I said that I didn’t know how he’d done it, but I had absolutely no intention of paying him, I didn’t believe his name or that he worked for BT.

I phoned the police to let them know, I wasn’t the first! It’s only just started apparently but it is escalating.

Their advice was to let as many people know by word of mouth of this scam. The fact that the phone does go off would probably convince some people it’s real, so please let as many friends & family aware of this.

This is good but not that clever. He gave the wrong number – it should have been 0800 800152 which takes you through to BT Business. The cutting off of the line is very simple , he stays on the line with the mute button on and you can’t dial out – but he can hear you trying. (This is because the person who initiates a call is the one to terminate it). When you stop trying he cuts off and immediately calls back.

You could almost be convinced! The sad thing is that it is so simple that it will certainly fool the elderly and vulnerable.

Obviously, if this scam is real, once they have your credit/debit card details, there is nothing to stop them cleaning out your account.

Detailed Analysis
This warning, which circulates via email and social media posts, claims that scammers are posing as representatives of UK telecommunications giant BT in order to trick phone users into handing over their financial information.

Beware of scammers posing as BT staff who demand immediate payment for a supposed unpaid bill According to the message, a scammer calls a potential victim and identifies himself as a BT staff member before demanding that a supposed unpaid bill be paid immediately lest the phone be disconnected. If the potential victim seems doubtful, the scammer offers to “prove” he is really from BT by temporarily disconnecting the phone. The scammer then uses a simple trick to make the victim think that the phone has really been cut off before calling back to demand an immediate payment. The scammer ask the victim to hang up and try calling someone else but simply stays on the line which restricts outgoing calls. Because the outgoing call cannot be made, some users may then assume that their phone has really been disconnected and pay up as requested to avoid a hefty reconnection fee.

The information in the warning email is factual. Such scams have indeed been occurring in the UK and a number of UK residents have already lost money to these fraudsters. BT has published the following notice on its website warning customers about the scam:
Please be aware of the following:

Fraudsters, pretending to be from various phone companies, have been calling people on the pretence that there is an outstanding bill and threatening to disconnect their line immediately if they do not pay the bill straight away.

The fraudsters have been pretending to “cut off” the customer. Worried about having their line cut off, some people have been persuaded into giving the fraudsters their bank account details.

The police are investigating and BT Security is looking into incidents where the fraudsters have claimed to be from BT.

Whilst BT does have debt handling procedures which may involve calling customers, BT never carries out disconnections during the call by way of proof.

We advise customers never to give out any banking details over the phone unless they are absolutely certain who they are dealing with.

If there is any doubt at all, a BT employee will be able to give the customer their employee ID number and an 0800 number to call, where the customer can check that they are who they say they are. The customer can also check their identity by calling 0800 800 150.

In some cases, the fraudster will claim that the line needs testing and they will temporarily disconnect it. When the consumer tries to make an outgoing call they are unable to do so. This is simply because the fraudster is still on the line meaning no outbound calls can be made.

This is a scam. Ofcom and BT have alerted the relevant authorities for investigation.”