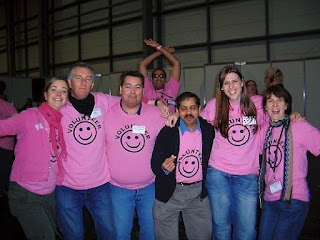 Why did I crew? I went last year and thought the crew weren’t as lively as they could have been towards the end of the event, it was a party that I wanted to go on. I decided to be the change I wanted to see, by crewing myself! After all, how could I criticise last year’s crew if I couldn’t deliver myself!? 😉

Thursday: When I arrived to register as crew, we were issued with pink t-shirts. I heard a couple of guys curse, I suggested they better get used to it, as this was going to have to be my favourite colour for the weekend. I was a little nervous and had no idea what I was doing there. I had come to meet a couple of friends crewing and a few participating as well so wanted a steady weekend and to be left in my own little world. A couple of days later when I spoke to others, they had been nervous too, even throwing up – we are all more alike than we think sometimes.
Everyone was put into various teams and I chose the ‘head sets’ team for the international clients who required translation in French, Spanish, Italian, German or Russian – here we issued them with headsets for the event. Even some of the crew had come from the other ends of the earth.
The crew was about 250 people to help with 8000 participants and apparently we were the smallest crew ever. Steve L. did a fantastic job of keeping us all energised and raring to go. He was a great presenter and really kept us all motivated. We also practised for what the team had to do on the firewalk. The head set team didn’t have to take part.
I decided to be ‘freelance’ or a floater (as others called it) and moved round the other teams and groups as needed. We went to bed ready for the main event tomorrow and an early morning to prepare for the partcipants arriving.

Friday: There were people from about 55 countries at the event. At the head set desk – not being able to really speak to any of these languages, we had to rely on the clients basic english and our body language, along with the internationally understood smile. Participants were unhappy when we didn’t have enough head sets for everyone at the beginning, especially as they had paid money. Not a good start to the event! Luckily more turned up by 4-5pm. We later had a mishap that evening when a whole load of headsets were returned and not booked back in but that is another story.
Quite a busy day behind the scenes that I didn’t get to see Tony in the main hall.

When I realised the entire crew had gone for an early firewalk, I threw my shoes off and legged it across the car park so I didn’t miss out. Isn’t that why everyone came to UPW or were too scared to attend!? After this the crew were all buzzing and ready for the main event.
On the Firewalk there are different positions to be covered by the crew members to help the trainers – I decided to be a spare cop on David T.’s firelane, as it was his birthday and Steve L. had made it look so entertaining in training.
It was so exciting helping guide the people down to the fire – and the way you end up getting in rapport with nearly everyone you get eye contact with. Standing alongside big guys to shoulder bounce them back into line, cheer like those that were excited, dance with those that wanted to shake their hips and gently nudge along those that were still a little nervous by getting in 2 people behind them in the queue. I ‘was’ about 300 people in the space of less than an hour.

Saturday: MedWestern the organisers packed in their Customer Service desk at about 3pm on Saturday. Customers don’t need to be looked after beyond that time I assume. So we dragged the desk over to our head sets desk. When I told the other volunteers that we were customer service as well, they looked stunned. I had to explain that nothing had changed as the volunteer shirts meant we were customer service and now we had a desk as well. Here we would deal with any issues and anything we couldn’t handle we’d find a med-western manager to take care of it (or failing that my account manager had volunteered)

Just like the donkey that fell down the well. You give us crap to deal with and we’ll just shake it off, step up and ask for more 🙂

As a treat a few of us did some unofficial spicy food, which was fire eating in an undisclosed location. Wow – that was fun! Although the flammable burps afterwards left something to be desired!

Sunday: I woke up in the hotel about 6am again and could here the Italians chanting ‘Woh, Woh, Woh, W-Woh’. When I turned to Brad P. in the other bed to ask him if he could hear it, he replied ‘Hear what?’ Yes, I now had more voices in my head competing for my time!
Along with Customer Service we now had a ‘lost and found’ desk – with books, cameras, phones, clothes, glasses and I wondered how people could lose such things and not take care of them. Oh the irony… I’d lost my switch card in one hotel and forgotten my fleece and T-shirt in another!
I’d met loads of friends there that I didn’t expect to see as well as those that I did. Someone even asked for me at Customer Services, though didn’t leave any details.

Monday: This was a quiet day with not much to do that then exploded into a huge ball of energy at the end of the event, before fizzling away after the participants and most of the crew had left. I had managed to get a place to dance on stage when Tony would come on. Then another crew member came back late, I stepped out for him as I could see on his face that he really wanted to do it.

A girl from the Youth Leadership Team wanted a pink t-shirt and I’d already promised mine to someone else. So I went round asking some of the other male crew members. I It’s funny how all of a sudden they’d come attached to the pink they disliked at the beginning of the weekend. I finally got around and borrowed one. It meant so much more than a t-shirt to this girl and the smile, hug and asking for a picture with me spoke volumes in the grand scheme of things!

It was amazing to see people returning their headsets as changed people. They were actually smiling despite the mishaps of no headsets on Friday. I made most of them give me a hug or at least a high five before they left to make their way home.

In hindsight, I now know why the crew were flagging towards the end of UPW last year. We had been getting up before 6am and getting to bed anytime after 10pm, depending on whether we wanted to go and socialise in the hotels or not. The feeling of wanting to be left alone I had a few days earlier had been replaced with a need to just chill out with everyone there. We were having a blast.
Had I left my own little world or started to drag everyone else into mine!?

Andrea S. asked me what I’d thought of the experience. I told her it was the best crew ever! She asked how many I’d done before and smiled that it was my first. I just felt that we were the best and truly knew it in my heart! It is going to be a tough crew to beat in future.
I could tell you everything, including the lows of the politics and the crew not having a proper farewell or the real highs, though those special moments will belong to those that were there 🙂
You get what you focus on so I will take away just the great moments and learn from the rest.
I felt priveliged as it really may be the last one with no further dates released for the UK / Europe.

I came to contribute and meet some old friends and took away so much more. Including the wonderful friends that I met over the weekend, I miss them so much already that I had to write this. This was the family and peer group that we all wish for – and I can’t wait for the next time. I made so many new friends that now mean so much to me – you know who you are…

People were asking me where I’d got all my energy from, as I was busy jumping up and down, clapping and giving the crew a boost as well as the participants. I stopped to wonder why afterwards. I wasn’t fitter than anyone else there – or healthier!? 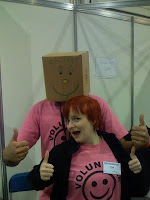 Then I realised! I was getting some of it from the crowd and participants. The rest I got from the great guys and lovely gals crewing that I had been hanging around with all weekend; we just passed that energy around amongst ourselves and magnified it. And remembering the reason that I crewed in the first place, the promise I had made myself to help make it the best crew ever! And it WAS!

Till we meet again… Bobby