Access to cheap oil has been America’s #1 gift of owning the world’s reserve currency.

This has made gas cheaper in the U.S. than almost anywhere else in the developed world. I know you may think gas prices have skyrocketed in recent years… but look at how much less Americans pay than other developed nations…

And here’s the thing…

If oil is no longer priced in dollars, the price of oil for Americans will skyrocket immediately. It will change everyones lives, overnight.

And just remember: In order for prices to start skyrocketing, all that has to happen is that other countries start preferring payments in something besides U.S. dollars.

Do you know where the money that you pay for oil really goes? 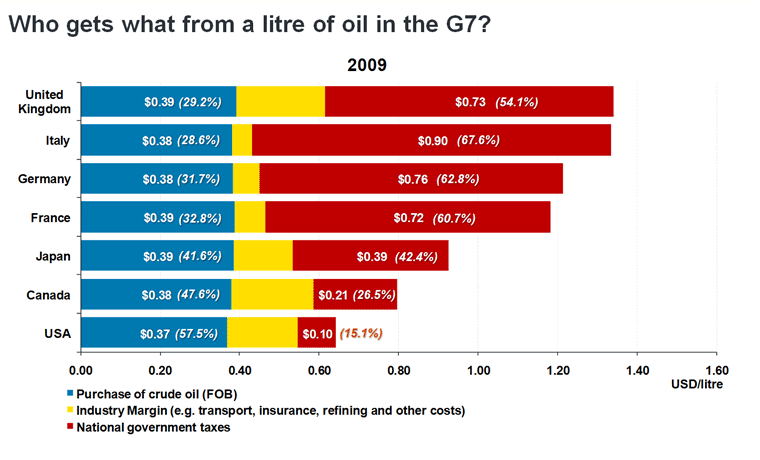 The prices vary due to the taxation on oil in the countries shown, not just to the price of the crude oil itself.
Oil is fuel and essential for heating and transport, to name a couple of the main uses. Hence the importance of it worldwide to society and the economy.

The countries above can actually make MORE in taxes than OPEC (Organization of the Petroleum Exporting Countries), the Oil producers Cartel,
The UK government made nearly twice as much in taxes, than OPEC for supplying it. The OPEC countries decide the price of oil and control the supply as well.

The US seem to charge very little taxes but you have to remember that the majority of oil trades is in dollars, so the US can print more money to acquire more – and they also get the crumbs by supplying it to all the other countries.  This transfer of money is often referred to as petrodollars – those that know the real reason for the Iraq war will be familiar with the term.

Petrodollars are when oil producing countries sell oil in dollars and then deposit those dollars back into Western Banks. These dollar reserves need to be invested in US assets – keeping the ‘money’ in American hands.  Petrocurrency is a term to describe other currencies that trade oil as well – now available in Euros and Rubels.  Now why would that be a problem?

Where the real cost is lives!

As you can see the US is a BIG consumer of oil and needs it for the country to function.
A move away from the dollar towards the euro would have a disastrous effect on the US economy.

“At present, approximately two thirds of world trade is conducted in dollars and two thirds of central banks’ currency reserves are held in the American currency which remains the sole currency used by international institutions such as the IMF. This confers on the US a major economic advantage: the ability to run a trade deficit year after year. It can do this because foreign countries need dollars to repay their debts to the IMF, to conduct international trade and to build up their currency reserves. The US provides the world with these dollars by buying goods and services produced by foreign countries, but since it does not have a corresponding need for foreign currency, it sells far fewer goods and services in return, i.e. the US always spends more than it earns, whereas the rest of the world always earns more than it spends.” – 2004, Cóilín Nunan – www.feasta.org

Since the agreements of 1971 and 1973, OPEC oil is exclusively quoted in US dollars. This created a permanent demand for dollars on the international exchange markets. As of 2005, OPEC continues to trade in US Dollars, but some OPEC members (such as Iran and Venezuela) have been pushing for a switch to the euro.

Since the beginning of 2003, Iran has required euro in payment of exports toward Asia and Europe, though prices are still expressed in US dollars. Iran is planning to open an International Oil Bourse (IOB, exchange), on the free trade zone on the island of Kish, for the express purpose of trading oil priced in other currencies, including euros.

On May 10, 2006 Russian president Vladimir Putin announced the project for the creation of an Oil Exchange denominated in rubles to trade oil and gas. The purpose of trading in rubles is to convert it into an international currency which would also be used to pay other commodities and goods. The Oil Exchange would operate from 2007 and will give rise to the petroruble as those countries that buy oil and gas from Russia will have to acquire them and use it as reserve.

When invading Iraq, the US were not looking for terrorists or fictional WMD’s (weapons of mass destruction) but Oil Barrels!

What precipitated all of this was not September 11, nor a sudden realization that Saddam was still a nasty guy, nor just the change in leadership in the United States. What precipitated it was Iraq’s November 6, 2000 switch to the euro as the currency for its oil transactions. At the time of the switch, it might have seemed daft that Iraq was giving up such a lot of oil revenue to make a political statement. But that political statement has been made and the steady depreciation of the dollar against the euro since then means that Iraq has derived good profits from switching its reserve and transaction currencies. The euro has gained about 17 percent against the dollar since that time, which also applies to the $10 billion held in Iraq’s United Nations “oil for food” reserve fund.

Whilst the US have been wanting to invade Iran, Libya has just opened itself up for an invasion and re-structuring.  The UK were hoping to doing it by releasing the Lockerbie bomber but the uprising has given the US a great excuse for a peace-keeping, oil-grabbing mission. Another war should keep the economy going a little longer and printing of more cash – making citizens worldwide even poorer, as money flows to the pockets of the rich in charge of corporations that are going to get some profitable war contracts!

“The U.S., the UK and NATO member States are calling for a No-Fly zone over Libya. This would be another case of unwanted intervention in the affairs of a sovereign state, not unlike the interventions that have occurred in Iraq and Afghanistan.

All too often, the United States sees itself as the World’s Police. The fact is that while it may see itself as the police Department of the World, the only thing America has managed to become is a police state. We see ourselves as a great power with unlimited jurisdiction over any other nation in the world, not because we are a shining example of democracy, but because we are the last remaining military superpower left on the planet.
While we criticize Col. Kaddafi and present him as a dictator that abuses his people, we have allowed our oil companies to invest billions of dollars into the petro-state of Libya. I don’t feel that I would be stretching the point if I surmised that America is more concerned with the possible loss of profits to American Oil companies than the loss of life to the Libyan people in this political battle between the present government in Tripoli and those who wish to replace it.” -Timothy Gatto, http://www.opednews.com/author/author2586.html

It is interesting how the US does not do anything about corrupt governments and dictators in other African countries, is it naive to assume that is because they don’t have Oil or other valuable assets to strip!?