Some people understand the lessons of karma, others don’t believe in it.  Are you one of the people who really ‘gets’ it or do you need to find a tangible reason to do the right thing?

Here’s are a couple of profound articles I found online about Karma, that I thought would be right to share with you.  Also how to purify any bad karma and mistakes you may have made in your life.

Remember – what goes around comes around, so do GOOD deeds!

Don’t be short-changed by short-sightedness
At a grocery store, a clerk accidentally gives a woman a five-dollar bill in change instead of a one-dollar bill. The woman quietly takes her change and thanks her lucky stars. The next day she parks her car on the street and later discovers a dent in her car door and a broken side view mirror. The cost to repair it? $500 exactly.

Practice Safe Karma
Nobody is immune to karmic law. It’s like gravity, only karma goes beyond the laws of physics to the mysteries of time — birth, death and re-birth. Are you scared yet? Don’t be. You don’t have to fear karma if you understand the rules of the game. Just get out there onto the playing field — your life — and keep practicing to get good karma. Go out of your way to be honest, or keep a promise, and see how the good effects start stacking up. The clerk you return the correct change to will learn to trust you, and she, or maybe someone else, just might give you a break when one day you forget your wallet at home. You’ll see.

When Bad Karma Happens to Good People
Some people do seem to just have bad karma. We see it all the time. But even if you’ve brought all your negative energies from past lifetimes into this one, you can make good causes and transform your bad karma from this day forward. Nearly every human being has the ability to tell right from wrong, good from bad, but some of us have taken more spins on the wheel of life than others and have learned how karma works.

Cosmic Karmic Time
Just as Isaac Newton’s third law of motion — to every action there is an equal and opposite reaction — explains physical forces, karma explains laws of thought and energy, cause and effect. An obstacle to recognising or even believing in the cause and effect aspect of karmic law may be time itself, sort of like “’karma lag.”  Sometimes, an act you commit today may take months or years, or even lifetimes, to show up as an effect in your life or the universe. And it becomes extremely hard to tell which action caused which result, never mind supply a reasonable explanation for why we seem to be paying unfairly for something we didn’t control — or did we?

Can I Escape Karma?
Karma says that, until you learn a lesson, you will continue to receive the same message through repeated experiences. If the woman from the grocery store didn’t put two and two together and realise she’d created her own negative energy, she’d probably suffer more financial losses down the road. It’s kind of like getting left back in school. When you are fully conscious of all your past actions, thoughts and emotions, and the lessons they brought you, you are ready to move ahead to the next grade … and even choose your next classroom.

How to Purify Bad Karma

The old saying “What goes around comes around” is a simple way to explain the notion of “karma.” Meaning “action” in Sanskrit, karma in Buddhism means that none of our actions are insignificant; the things we do determine what things will happen to us. With karma, action equals reaction; if we act in a positive manner, good things will happen to us. Conversely, negative actions result in negative reactions. Believers in reincarnation believe we carry our positive and negative karma with us from one life to the next. Thubten Chodren, a Buddhist nun and teacher who studied under the Dalai Lama, says you can purify your bad karma by practicing The Four Opponent Powers: Power of Regret, Power of Reliance/Repairing the Relationship, Power of Determination not to Repeat the Action, and Power of Remedial Action.

1. Regret your negative actions. Buddhism teaches that “regret” is different than “guilt.” When you feel guilty about the action, it is self-serving because it centers on you and how you feel. Regret, on the other hand, “has an element of wisdom; it notices our mistakes and regrets them,” Chodren says. If you’ve acted in a harmful way, you should think about what you’ve done and how your actions have negatively affected others. You should also think about how those actions may hurt you and others in the future.

2. Try to repair the damage done by your negative actions. If your actions have caused harm upon another person or persons, it is important to apologize to them for what you’ve done. Sometimes this isn’t possible because the person is dead, we’ve lost touch with him or we don’t know who our actions have damaged. This is okay since what is more important, says Chodren, is to repair the damage within your own mind. “Here, we generate love and compassion, and the altruistic intention for those whom previously we held bad feelings about,” she says. By changing those negative emotions within us that caused us to act negatively in the first place, we can change ourselves from within.

3. Strive not to repeat that negative action in the future. You should set it in your mind that you will not commit the negative act again; the longer you are able to keep that promise to yourself, the more confidence you will gain that you can break bad habits and act in more positive ways. It is not always easy to do this, so if you do find yourself repeating a negative action, such as losing your temper or gossiping, Chodren says you should tell yourself you will not repeat the action for the next 2 days. Once you’ve achieved that goal, you can say to yourself “I will continue to try and not do that again.”

4. Take positive action. Practicing Buddhists have many methods of remedial action including reciting mantras, making offerings to a monastery or temple, and meditating. Chodren says you can also do things like perform community service such as volunteering at a hospital, feeding the homeless or teaching people to read. Any action that benefits others can be considered a remedial action. 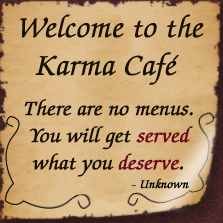