Not only are all the Banks printing money and ripping off the people of the World, the Banks of Scotland have the audacity to go one further and keep printing and issuing illegal currency – that does not have to be accepted as payment for a debt! (you may if you choose but that is up to you). Does that not make it counterfeiting and worthless?

Read the info below sourced from Wikipedia and a big thanks to the Drummond’s of Alloa (who I met at the Robert Kiyosaki Rich Dad weekend) confirming what I thought.

So as a Bank, you’re only allowed to steal if you’re a thief and the government authorises it. If they don’t? Then steal anyway as no-one expects any more from you!

UPDATE: Even though they say it is not Legal, the Bank and Lawyer spin doctors say it is ‘not illegal’ either!? Leave it to banks and lawyers to contradict themselves, then expect us to trust them {joke}

HM Treasury is responsible for defining which notes have ‘legal tender’ status within the United Kingdom and the following extract from Bank of England’s website may help to clarify what is meant by “legal tender” and how little practical meaning the phrase has in everyday transactions.

“The term legal tender does not in itself govern the acceptability of banknotes in transactions. Whether or not notes have legal tender status, their acceptability as a means of payment is essentially a matter for agreement between the parties involved. Legal tender has a very narrow technical meaning in relation to the settlement of debt. If a debtor pays in legal tender the exact amount he owes under the terms of a contract, he has good defence in law if he is subsequently sued for non-payment of the debt. In ordinary everyday transactions, the term ‘legal tender’ has very little practical application.”

And for Legal Tender?

What is the Bank’s “Promise to Pay”?

“The words “I promise to pay the bearer on demand the sum of five [ten/twenty/fifty] pounds” date from long ago when our notes represented deposits of gold. At that time, a member of the public could exchange one of our banknotes for gold to the same value. For example, a £5 note could be exchanged for five gold coins, called sovereigns. But the value of the pound has not been linked to gold for many years, so the meaning of the promise to pay has changed. Exchange into gold is no longer possible and Bank of England notes can only be exchanged for other Bank of England notes of the same face value. Public trust in the pound is now maintained by the operation of monetary policy, the objective of which is price stability.” 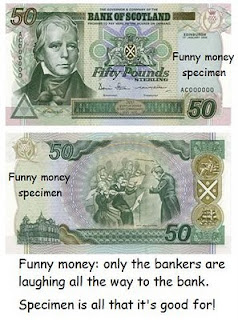 Yes that’s right – all the banks do is offer to swap your worthless paper for even more paper as long as you continue to TRUST them!

It’s a Mad, Mad World banking system! << an earlier post I wrote about the banks and trust.

The following is from Wikipedia:

Seven retail banks have the authority of Parliament to issue sterling banknotes as currency. Despite this, the notes are sometimes refused in England and Wales, and are not always accepted by banks and exchange bureaus outside of the United Kingdom. This is particularly true in the case of the Royal Bank of Scotland £1 note, which is the only £1 note to remain in circulation within the UK.

In 2000, the European Central Bank indicated that, should the United Kingdom join the euro, Scottish banks (and, by extension, Northern Ireland banks) would have to cease banknote issue. During the Financial crisis of 2007–2008, the future of private banknotes in the United Kingdom was uncertain. It has been suggested that the Banking Act 2009 would restrict the issue of banknotes by commercial banks in Scotland and Northern Ireland by removing many of the provisions of the Acts quoted above. Banks would be forced to lodge sterling funds with the Bank of England to cover private note issue for a full week, rather than over a weekend, thereby losing four days’ interest and making banknote production financially unviable. Following negotiations among the UK Treasury, the Bank of England and the Scottish banks, it was agreed that the funds would earn interest, allowing them to continue to issue their own notes.

Following the announcement that HBOS (Bank of Scotland’s parent company) would be taken over by Lloyds TSB in September 2008, it was confirmed that the new banking company would continue to print bank notes under the Bank of Scotland name. According to the 1845 Bank Notes (Scotland) Act, the bank could have lost its note-issuing rights, but by retaining headquarters within Scotland, banknote issue will continue.