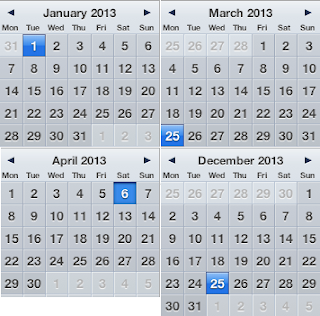 Do you know why 6th April is Tax day?  When did the New Year actually start, 25th of March or 1st of January?  And was Christmas Day more than just a pagan/christian festival celebration, as it also coincidentally marked the start of the last Quarter of the Year?

History rewritten – dates are not all what you think they are…

Here’s an interesting article I found about Calendars being ‘reformed’ in 1752.  This also means that any dates before 1752 are not linear, so the dates and times may not be correct. – but luckily we’re moving forwards so it shouldn’t be a problem if you were born after 1752! 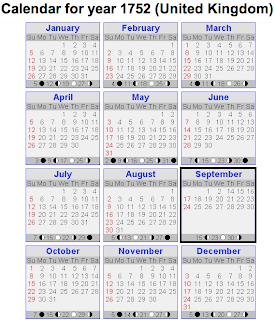 In September 1752, Great Britain switched from the Julian Calendar to the Gregorian Calendar. In order to achieve the change, 11 days were ‘omitted’ from the calendar – i.e. the day after 2 September 1752 was 14 September 1752.
This change was as a result of an Act of Parliament – the “Calendar Act” of 1751 An Act for Regulating the Commencement of the Year; and for Correcting the Calendar now in Use.

What isn’t so widely known is a second change which the Act introduced – as named in the first part of the Act’s title. The Act changed the first day of the year (or, if you want to impress your friends with a new word, the Supputation of the Year).

Prior to 1752 in England, the year began on 25 March (Lady Day). Lady Day is one of the Quarter Days, which are still used in legal circles. The Quarter Days divide the year in quarters (hence the name), and the Quarter Days are: Lady Day (25 March), Midsummers Day (24 June), Michaelmas Day (29 September), and Christmas Day (25 December).

Historians have to be on their toes with dates prior to 1752. For example, in The Tower of London there is some graffiti scratched into a cell wall by someone imprisoned in January 1642 for his role in the Battle of Edgehill (which took place on 23 October 1642).

The UK Tax Year starts on…

Lady Day was one of the days when rents were traditionally due. In fact, this practice must have continued will beyond the 18th century as I’ve seen paintings of large meals for farm workers on Lady Day. Taxes were also due on Lady Day. With the ‘loss’ of 11 days in September 1752 and the stories of riots on the street, people weren’t impressed with having to pay their taxes in March 1753 like nothing had happened (in fact, as 25 March 1753 was a Sunday the taxes were due on Monday 26 March 1753 ) – so the taxman skipped the 11 days and decreed that taxes were due on 6 April 1753. And, to this day, the UK tax year starts on 6 April.

For conspiracy buffs, those who like to think rather than be told, David Icke has a section on history rewritten here: History Rewritten