Social Media is great and can give you a voice that can be heard by millions – but you should be careful about WHAT you say, WHO you say it about and who HEARS it.

Below is a story of two guys who’s harmless comments are now being investigated by The Secret Service (at least someone’s looking out for Obama’s Health care). That comment could lead to a completely different investigation. I hope they’re not sat naked in their house, smoking weed and watching dodgy films when these guys bust in and find anything dubious lying around.

Yes you have freedom of speech – but the government has more power over you to do what it wants! Be careful what you say, if you’re going to shout from the roof tops, make sure it is honest, ethical and moral…

“Speech is speech, but it’s also an action and can have legal consequences. Threats have never been protected speech. I couldn’t say, “How would you like it if I set your house on fire?” and then claim I was merely inquiring after your opinions.” – Semiotix 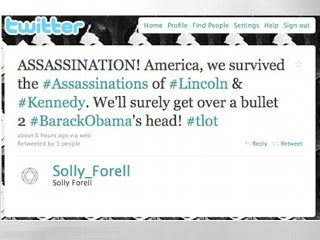 “Two Twitter users are learning the hard way that threats against the President of the United States are taken very seriously, even when they’re just a tweet.

With intense debate swirling around last night’s healthcare reform vote, @THHEE_JAY and @Solly_Forrel expressed their frustration with the President by publishing tweets reading “ASSASSINATION! America, we survived the Assassinations and Lincoln & Kennedy. We’ll surely get over a bullet to Barrack Obama’s head” and “You Should be Assassinated!! @Barack Obama.”

Now, the Secret Service is investigating, as they do with all perceived threats against the President. ABC News notes that the two users both tried to backtrack from their statements, and at least one of the accounts (@THHEE_JAY) appears to be offline as of Monday evening.

This isn’t the first time social media activity has caught the attention of the Secret Service. Last year, a teen created a Facebook poll asking “Should Obama be killed?” Ultimately, charges weren’t filed after the perpetrator’s identity was discovered, and it seems likely that the suspects in this case had no formal plans or means to try and assassinate the President.

Nonetheless, it’s another reminder that what’s said in social media carries just as much weight as what’s said using other forms of communication. Apparently, some users still need to figure that out — and more of them will, as law enforcement continues to leverage social media in their crime-fighting efforts.”