I read this great story about a film Director, Fede Alvarez, from Montevideo in Uruguay, who shared his 5 minute film on Youtube with everybody. It took US $300 to shoot the live action and about a year (part time) to complete the 90 vfx shots.

The Youtube film then got a lot of attention from Hollywood landing him a deal with Sam Raimi to direct a $30 million film. It just goes to prove, anyone with some talent can become a hit on the internet, by simply using it to share their message with the world! Social media is free speech and leverage for the little guy to compete with the big shots. Use it or lose it… 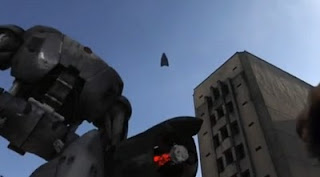 Federico Alvarez‘ short film Panic Attack! hit YouTube last month and became the latest example of viral video, a term I genuinely despise because studios have co-opted the idea to try to force marketing maneuvers to “go viral.” Doesn’t work that way. But Alvarez’ short, produced for $300, has already grabbed over 1.5 million hits, the attention of Sam Raimi, and now, a $30 million contract for Alvarez to develop a feature film.

The BBC reports that the deal has been consumated, although based on the success of something like Paranormal Activity, the amount may seem quite high, given what Alvarez was able to accomplish for 1/100,000th of the new contract. There is some symmetry here, though, because $30 million was what director Neill Blomkamp used to create District 9 with producer Peter Jackson. And there are some real similarities between the two sci-fi projects.

“I uploaded (Panic Attack!) on a Thursday and on Monday my inbox was totally full of e-mails from Hollywood studios,” Alvarez said. “It was amazing, we were all shocked.”

The movie Mr Alvarez has been asked to produce is a sci-fi film to be shot in Uruguay and Argentina. He says he intends to start from scratch and develop a new story for the project.

“If some director from some country can achieve this just uploading a video to YouTube, it obviously means that anyone could do it,” he added.

The director says, however, he’s not interested in making a feature version of Panic Attack!, choosing to start from scratch on a new story. I’m not sure why, frankly, especially given the money involved, but maybe Raimi saw enough of his talent to give Alvarez the chance of a lifetime. Who knows whether or not he’ll return to this story down the line.