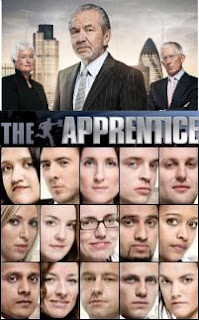 The Apprentice is back for another series, every Wednesday on BBC1 at 9pm.

With 15 contestants battling for a job with Sir Alan Sugar, this is a must for all business fans and people who love reality TV!

Join this facebook group to keep up to date, have a laugh when it goes horribly wrong and to cheer on your favourites as well!

Twenty thousand CVs were received from applicants around the UK last year and I forgot to post mine! So at least I saved the price of a stamp 😉

Check out the candidate profiles of those that made it: http://www.bbc.co.uk/apprentice/candidates.shtml

This series is licence payers’ (and Sir Sugar’s) money well spent. Forget Orange Wednesday at the cinema – Sugar Wednesday is what mid-week was made for!

** Play along with the other viewers and guess who will be fired with the Predictor:
http://www.bbc.co.uk/apprentice/about/predictor.shtml

“The new series of The Apprentice is already a man down following one candidate’s decision to quit before the cameras started rolling.

The man, who has not been named by the show’s producers, bowed out before the first task had even been announced.

Sir Alan Sugar said he had “never met the fellow” and added “there was nothing sinister about it”.

But in the first episode of the series, Sir Alan tells the remaining group that one of them had “bottled it” and left.” – http://news.bbc.co.uk/1/hi/entertainment/7948783.stm