A Holiday is by definition a Holy Day, the word originally referred only to special religious days – but the Bankers felt they deserved some time off too.

Historically this would be the day that Bankers went for Confession and then threw themselves out of windows to save the honour of their families and their karma. Black Mondays were around times when they’d caused a financial crisis – there were so many leaping from tall buildings,  in a mass cleansing, that they blocked out the light from the sun.

Those were the good old days! Oh, how old traditions are forgotten. If only…

Prior to 1834, the Bank of England observed about thirty-three saints’ days and religious festivals as holidays, but in 1834, this was reduced to just four: 1 May (May Day), 1 November (All Saints Day), Good Friday, and Christmas Day.
In 1871, the first legislation relating to bank holidays was passed when Liberal Politician and Banker, Sir John Lubbock introduced the Bank Holidays Act 1871 which specified the days [set out below in italics]. Sir John was an enthusiastic supporter of cricket and was firmly of the belief that bank employees should have the opportunity to participate in and attend matches when they were scheduled. Included in the dates of bank holidays are therefore dates when cricket games were traditionally played between the villages in the region where Sir John was raised.

The English people [bankers] were so thankful that they called the first Bank Holidays ‘St. Lubbock’s Days’ for a while.  Scotland was treated separately because of its separate traditions; for example, New Year is a more important holiday there.

The act did not specify Good Friday and Christmas Day as bank holidays in England, Wales and Ireland because they were already recognised as common law holidays, and because of common observance, they became customary holidays since before records began.

Exactly a century after the 1871 Act, the Banking and Financial Dealings Act 1971, which currently regulates bank holidays in the UK, was passed. The majority of the current bank holidays were specified in the 1971 Act, but New Year’s Day and May Day were introduced after 1971.

Under the Banking and Financial Dealings Act 1971, bank holidays are proclaimed each year by the legal device of a royal proclamation. Royal proclamation is also used to move bank holidays that would otherwise fall on a weekend. In this way, public holidays are not ‘lost’ in years when they coincide with weekends. These deferred bank holiday days are termed a ‘bank holiday in lieu’ of the typical anniversary date. In the legislation they are known as ‘substitute days’. The movement of the St Andrew’s Day Scottish holiday to the nearest Monday when 30 November is a weekend day is statutory and does not require a proclamation.” –

That’s right. Everyone else knows what a Holiday or holy day is but the Bankers have an Act for it and even the Queen gets involved.  It’s just not cricket! 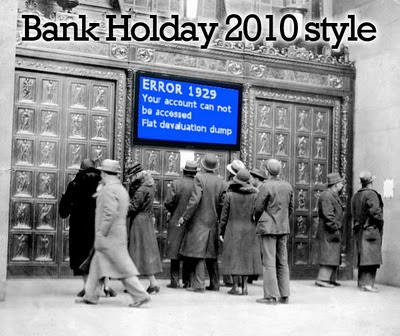