Got up last week and noticed my car keys on the cupboard on the side. I thought it was strange because I’m living in Hammersmith and had been parking at a friend’s in Angel, so didn’t need the keys – but for some reason they were ‘looking’ at me.

On my way into central London I decided to go see my friend Isaac instead. Well actually to go to Mikes Quality Fish & Chips in Angel, where the guy behind the counter thought I was joking when I said I’d come all the way across London to eat (having Chai Tea Latte’s and panini’s all day gets boring after a while.)

Whilst we ate someone had been walking back and forth past his door a few times before we actually went out to see what was going on.

When I approached him, he told me I was illegally parked and had to pay the fine else I’d be towed. Hmmm… Not very friendly! 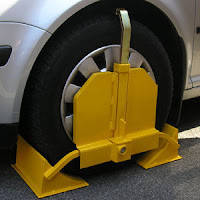 What would Bobby Do?

Instead of getting upset, I told him that I was parked legally as far as I was concerned and there were no signs. He said it didn’t matter and pointed to other signs that were just round the corner. So I had to change tact, after all he had a clamp on my car and the next stop was the pound before the crusher – and there was no way he was going to do that to my baby!

I tried the white lie of I just parked here now and can just move it. NO!
Next I asked if there was anything he could do? To which he replied: “I know what you’re thinking, even if you offered me £150 to take it off, I can’t and won’t!” So that idea went out the window.  Staying cool was a challenge with money on the table and a clamp on my car.
Next I asked if he could help me? (and added the puppy dog eyes) To which he told me – whispering as if it was secret: “Write in and appeal and you’ll get a refund for the clamp.”
I believed him as it seems to make reasonable sense, as most people wouldn’t bother to appeal or claim. So his ‘company’ don’t have to deal with them, like a money-back guarantee on a product, where only 1-2% ever ask for their money back. Give it back to avoid the hassle. I then gave him my debit card, fighting back the tears, to get released.
He explained the appeal procedure and said “I know you’re not an idiot” to which I told him “Yes, I am – as this has never happened to me before” to which he smiled.

Tips?
– Claim your money back or what is rightly yours if you believe you are 100% right. If you’ve parked incorrectly or done something wrong AND know it, your defence will be weaker and your lack of confidence will show.
– Don’t get emotional over the matter, be detached over the outcome of getting it right. All results serve a purpose, maybe not always the one you expect.
– When dealing with people – be nice. Remember they are just people like you and me – and all they want to do is help if you ask them. Don’t get mad, get HELP!
“Can you please help me?” are very powerful words when put together!

Save the emotions for your letter or claim. Ask questions on how they can treat people like that? What you can do to avoid a misunderstanding in the future. And to push it a little more, maybe how to complain above them to get a result if they won’t help 😉 They then have to deal with the facts and maybe feel a little bad too (you hope they’re human) and want to deal with your matter fairly.

Most people are now confused when I tell them about the nice clamper I met – but they’ve probably not had that experience, as they’ve never been nice to someone doing their job – no matter how ‘immoral’ we may think it is.

I was off to a party in Central London and decied to take my car and move it too. It was then that I realised that I didn’t have my keys and could clearly see them on my cupboard! Was I meant to ‘listen’ to them that morning, pick them up and have moved my car earlier… or would that just be too woo-woo!? At least the timing was good to catch the guy doing it.

Then I had to tube to Hammersmith to get the keys (1 hour) and back to get my car (1 hour).  I turned up at the party 2 hours too late, then proceeded to upset the birthday girl with the truth… but that’s a whole different story!

A few of my friends are currently in Malaysia doing the Enlightened Warrior Training Camp and then on their way to enjoy the sun on Pom Pom Island.
Me? I’m gonna hang out with my friend Harry Singha this weekend, supporting him with his exciting new event Light Up Your Life! I’m due a holiday this year and WILL get it in yet.