Is it good to say YES to every opportunity that comes along in life?

This is the only film I’ve ever been to see at the cinema and left with sticky pants! Nothing to do with the movie, just the waffle and Ben & Jerry’s Chunky Monkey ice cream that exploded in my lap. Anyway… 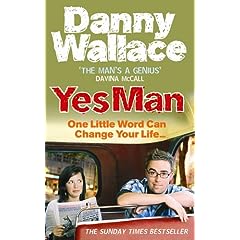 Based on the book YES Man by Danny Wallace.

“I, Danny Wallace, being of sound mind and body, do hereby write this manifesto for my life. I swear I will be more open to opportunity. I swear I will live my life taking every available chance. I will say Yes to every favour, request, suggestion and invitation. I will swear to say yes where once i would say no.”

“Yes Man stars Jim Carrey as Carl Allen, a man who signs up for a self-help program based on one simple principle: say ‘yes’ to everything…and anything. At first, unleashing the power of yes transforms Carl’s life in amazing and unexpected ways, but he soon discovers that opening up his life to endless possibilities can have its drawbacks.”

In the film, Jim Carrey’s character always says No and makes excuses not to do anything! A friend suggests he goes to a Yes Seminar – this will scare anyone who’s never been to a personal development event but it is hilarious if you have. I nearly jumped up and down in the cinema, lol!
He leaves the seminar with a promise to himself, a covenant to say Yes to every opportunity that comes his way. This actually opens his life up to doing more instead of the same old stuff every day.

It works really well for him and you are just waiting for the catch. It finally comes and in true Hollywood style, he works his way through it, leaving you rooting for the hero of the film. Lots of interesting situations crop up and the majority of them will leave you laughing so hard and wondering if you can out do him.

Should you go and see this film? Do you remember what the man from Del Monte says? He says, Yes! 🙂

I’ve been on a pretty good Yes streak myself for the last year and wouldn’t change it for anything. Saying Yes to opportunity opens up whole new world’s that would have been left unexplored otherwise. The places I’ve been, parties I’ve attended and wonderful people I’ve met – all because I said Yes, where I may have said no before. Friends who have been on the journey with me and met along the way will testify to this.

I don’t indiscriminately say Yes to anything, just what I WANT to do and feels right and/or possibly fun. And it always works out for the best. Though I am going to have to cut back in the New Year, as time constraints mean too many things to do take the focus off being good at fewer things by doing less.

It’s not only about saying Yes over No. After all, your life is all about what you choose to say No to as well. The stone is chiseled and pieces removed, what is left is the finished sculpture. The statue wouldn’t be so beautiful if the sculptor didn’t know which pieces to take away.

The same applies to your life. Know what to say Yes to and be open-minded and also know that it is okay to say No as well; to things you don’t want or need in your life.

Have you ever said No to opportunities that could have put you on a different path? Maybe you should now say YES to Life! Try it – it may be fun and who knows where synchronicity will take you.

You can start by going to watch this film with a couple of friends and having a good night out. The rest of your new life starts with a little Yes!

One thought on “YES Man – should you say Yes?”